We are waiting till Eric is able to draw on this canvas. He has basically recovered from the narrow breathing but still is getting terribly exhausted doing small movements. Still not coming out of his room. In the meantime, I have darkened the lines on the whole drawn area.
12th April 2013

For the last week, to satisfy Eric's urge to ‘go out’ we let the windows of our house be open. Eric liked it so we continued to let the windows be open for a bit, while we were eating. We did this maybe for a week. Gradually, Eric started getting breathless. We live in an excellent area, surrounded by greenery on all the sides except one, which is next to a main road. Even though  the front windows are never opened because of the traffic pollution, it started seeping in from the side windows and that made Eric sick. It was ok he said. Just that he doesn’t get that last little air in, feeling narrowness in the throat and lump in the chest. (Eric is a patient suffering from severe COPD).

We decided not to take him out of his bedroom so that he gets chance to recover back his ‘normal’ breathing. Decided to set up the dinning table in his bedroom so we could have our meals there and not in the dining area outside. 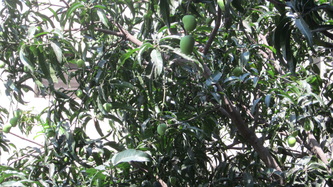 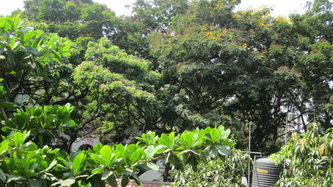 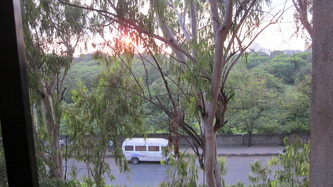 We thought early morning could be cooler. So the next day, by the time I went to Eric's room, he was already sitting in his wheel chair to go and start working. I rolled him to the room. The sun came right on the place where Eric was to sit. He could not work, it was too hot. We decided that in the meantime, I finish darkening the lines so Eric gets a better picture for his drawing. The whole day Eric was too breathless to work. 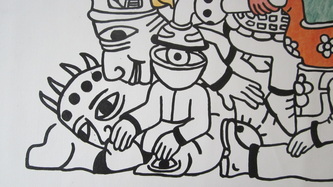 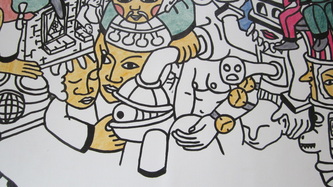 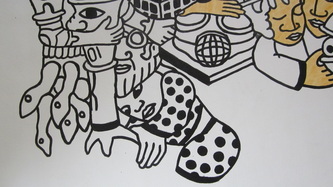 Whole day, it was too hot for Eric to work. He cannot function when it is hot. Its summer time in India when the outside temperature is between 35 an 42 degrees C. Inside, thermometer showed 27 degrees C. In that heat Eric is brain dead. 22 - 23 degrees C is the ideal temperature he feels comfortable in and can work. There is no air conditioning in that room. Fan makes him hyperventilate. We waited the whole day to work on the canvas. But no chance... 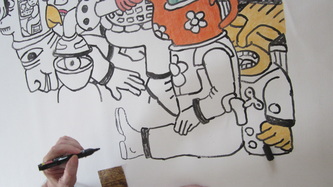 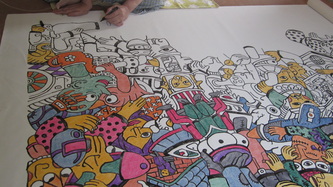 On 9th of April 2013, Eric thought to restart working on the unfinished 7 x 16 feet colored ink canvas before his eyesight gets so bad that he is not able to complete it anymore. I set up the place for it, the same day. 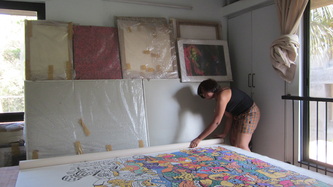 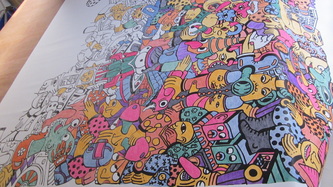 Time and again, after each finished black and white canvas, Eric wanted to make one colored one to see how it will be, if he made one in color, on a bigger scale. So, finally, on 9th Dec 2012 Eric started working on a 7 x 16 feet canvas in color. Full of enthusiasm, we started working on it. Eric would draw with Indian ink and brush and I would color it as per his wishes and then darken the lines. It was going quite smooth and we were happy the way it was progressing. Eric specially liked the ink colors we were using, it looked like a page taken out of a child's coloring book, only much bigger in size.

Eventually, because of his worsening eyesight, Eric could not see when the brush tip made contact with the canvas and was afraid he may mess it up with the ink blobs.  Eric had to stop working on it because repairing the canvas is really not his thing.

(After Eric stopped working on this big, colored canvas , he started working on a 2 series of drawings on canvas with permanent marker pens. One was called “Works in primaries and the essentials, consisting of 12 paintings, which I colored in oil painting, Eric’s favorite medium and the second one titled, “Study for a bigger work”, consisting of 16 canvases, with 2 figures.) 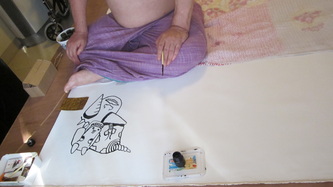 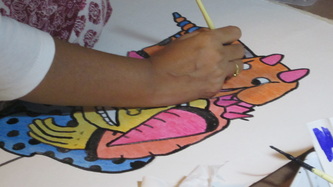 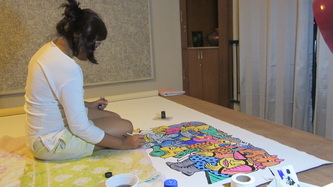 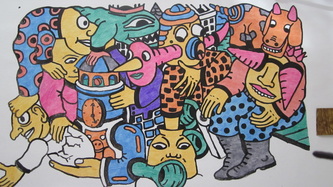 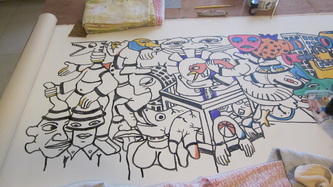 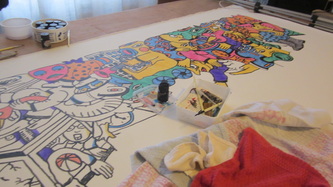 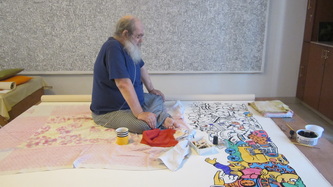 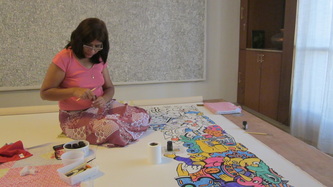 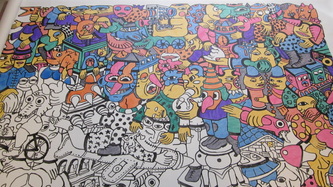 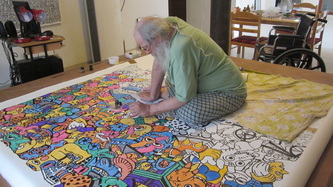 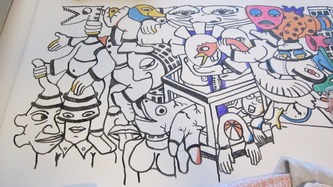 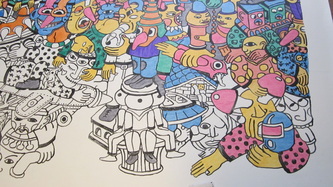 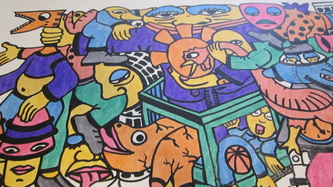