Painting Number one: 90 Days From B To C: Life in a nutshell, 2007
Oil painting measuring 182 by 487 cms.
_"A Voyage through a human mind, the no existence of reason, an ode to the absurdity of being, a poem for the ones who left too early, dedicated to my beloved wife and to all those who disagree with me".
Fragments
_Click on the images to enlarge 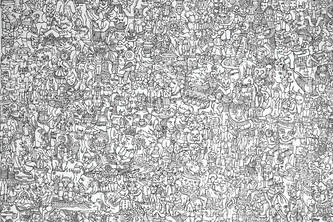 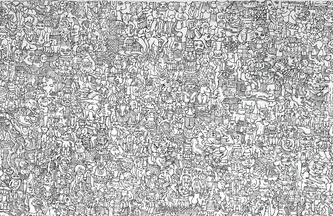 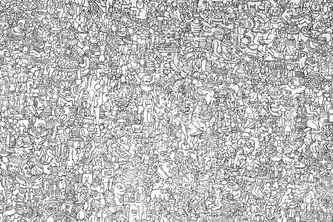 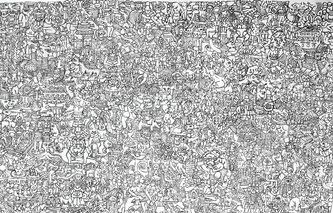 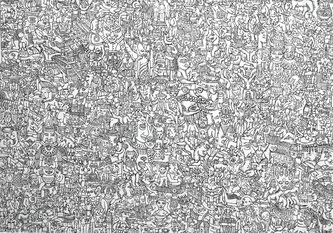 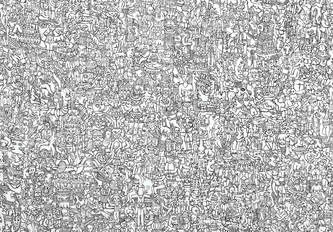 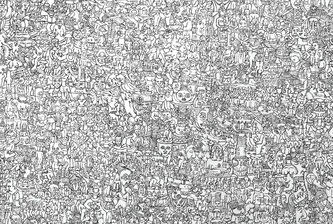 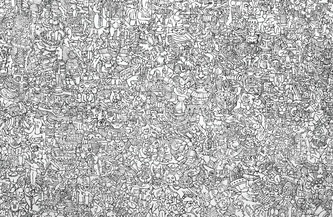 Eric G. C. Weets on the idea behind this painting

Inspired by my earlier pen drawings, (the idea to make these pen drawings came about during the years I was in India in the late 80’s, after I saw the South Indian temples) I started drawing small figures and objects juxtaposed randomly, almost automatically, as they were flowing out the drawing pen. These chaotic looking pen drawings, when seen from a distance, look like grey abstract, the effect of which I compared to the earth, seen from space where you just see abstract patches of colors. Its only on close inspection, the abstract begins to manifests itself in clearly defined details.

In an attempt to create an illusion of the entire world on one single surface, where the viewer is confronted with the immensity of all the aspects that makes the world, the pen drawings were falling sharply short because of their smaller sizes and the final result was nowhere close to what I expected. Intuitively, I felt there was something missing. So in the year 2007, I started working on a large scale painting.  Everything that came up in my mind at that particular time, put itself on the canvas without my involvement.  I do not think twice, redo or repair anything in my works.

I think my work symbolizes quite well the situations we are in today, without passing any judgment from my side. I feel whatever I have experienced, comes out on the canvas.   I recognize some things immediately; sometimes it reminds me of the situations I forgot, other times, the experiences I would rather forget.

I see this project as research of my own mind.  Since 2007, I am working again, for as many hours as humanly possible, so that the stream of figures stays flowing, without me being conscious about it.  With these series of paintings, I want to see first of all, how far I am able to dig up whatever I have seen, heard or felt from the day I am born. Secondly, how long I can go on drawing almost automatically, the figures and situations, straight out of the subconscious. Because for me, the most important thing is that the flow has to stay automatic, without my involvement and without repetition.