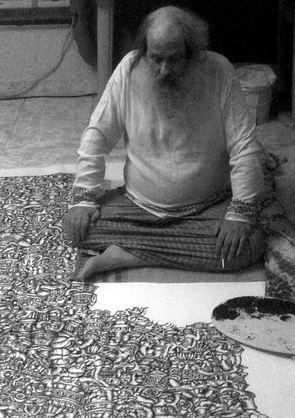 Eric Weets is one of those rare people - a genuine original.  Everyone is unique, just as every ice crystal in a snow drift is unique (unbelievable though it may seem but true) - but few individuals develop an expressive language that is uniquely their own.

Weets paints his 'stream-of-consciousness' or rather 'stream of sub-consciousness' paintings by starting in the top right hand corner (he is left-handed) and working down to the bottom left hand corner - a method used by another 'visionary' painter, the English artist Stanley Spencer. Weets tries not to think too much about what he's doing (a difficult act of mental disrobing), but let's the brush go where it likes.  In this way he unearths memories and dreams, fears and feelings, and mixes them with recent things he's seen in ways that turn the everyday events of life, which we take to be down-to-earth and real, into an indeterminate and continuous flow which is much closer to our real sensations of experience.

So he paints instinctive portraits of his life. What is remarkable, and bewildering, is that these very large paintings, when finished, have an overall effect, a visual completeness, that suggests that another level of awareness is at work over and above their piecemeal build up.  They are paintings not just of the drift of feelings but of a complete mental make-up. This accounts for their overall knowing 'look', their generosity to the viewer who is invited in to explore the interstices of the artist's mind while he improvises, and at the same time given a wholesome, welcoming embrace.  This subtle multi-layering of awareness and meaning turns what in some hands could be doodles into enthralling works of art.

Eric Weets was born in Belgium in 1951. Brought up by his maternal grandparents and severely dyslexic, he failed at almost everything in school.  He trained as a diamond cutter, but eked a living doing odd jobs to sustain his growing interest in painting and in jazz and, later, in electronic music. Chronic stage fright put an end to any hopes of a performing career.  Radically pacifist by nature, he became disillusioned with the Hippy movement as it became increasingly commercial. He travelled to the Philippines, eventually settling in India, where he met Filomena Pawar who represents him to a world from which he has increasingly withdrawn. 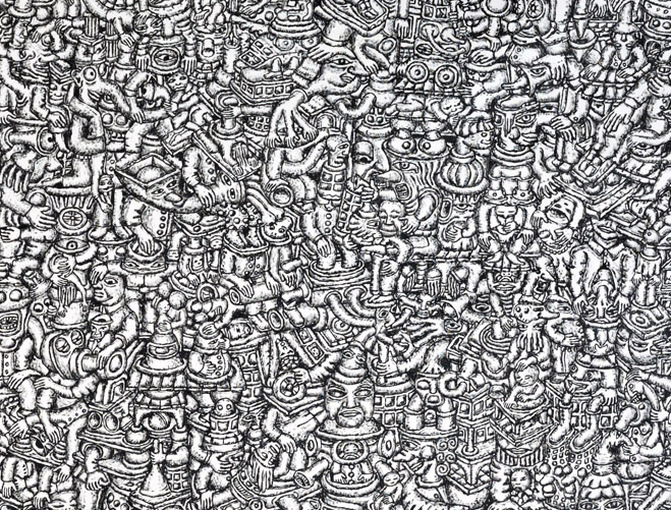